Today is the last day of Kristie Dean‘s Blog Tour to celebrate the release of her latest book, On the Trail of the Yorks. Congratulations to Kristie on what has been a wonderful virtual book tour – and ‘thank you’ for asking History…the Interesting Bits to be a part of it.

So, I think, for the last day, it is only fair to give you my review of this remarkable book.

Richard III is probably the House of York’s best-known figure, but the other members of the family are just as intriguing as the king who fell on Bosworth Field. This book explores the places associated with members of this fascinating family and discovers their stories through the locations they visited and inhabited. It reveals the lives of the Yorks by exploring the cathedrals, castles, battlefields and manor houses that shaped their history. Featuring locations such as Fotheringhay, Baynard’s Castle, Durham Cathedral and the Palace of Westminster, among many others, this book brings each site to life, giving a gripping account of its heritage as well as accurate information for the visitor. Extensive descriptions and an array of illustrations and photographs recreate these poignant and sometimes controversial locations, immersing the reader in the ancient and intriguing world of the Yorks.

Just over a year ago Kristie Dean published her book, The World of Richard III. This was a unique book with its own inimitable style. A combination of history book and travel guide, Ms Dean told the story of Richard III through the geographical locations associated with him. In On the Trail of the Yorks Kristie Dean has extended her research to include the rest of Richard’s family, from his father the Duke of York through his wife and brothers to his niece, Elizabeth of York, queen of Henry VII. 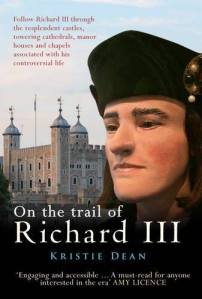 The book is laid out in an easy-to-follow format, with each main character of the Yorkist dynasty getting their own chapter. The chapters then follow a loosely chronological manner, based on when the locations were used, or visited, by the person in question. Ms Dean always gives a history of the association between the Yorks and the historic site, while also giving a general history of the location. The book acts as a practical guide for each location; giving not only useful contact details, but also travel information and what to look out for while you are there.

The centre of the book has a treasure trove of colourful and black and white images. Including portraits depicting leading members of the House of York and photographs of the places the Yorks and Kristie Dean have visited. The wonderful pictures help to bring the history to life and you find yourself flicking between the descriptions of the various sites and the related pictures.

Kristie Dean also discusses locations which are no longer available to us. Her description of Old St Paul’s Cathedral, which was destroyed during the 1666 Great Fire of London, is so thorough and passionate that it leaves the reader bereft at the thought of what is lost.

Some places are familiar to any fan of the Yorkist dynasty; York, Fotheringhay, Ludlow and, of course, Middleham. While other locations are less-instantly recognisable as having Yorkist connections, but just as interesting; castles such as Conisbrough and the shrine of Our Lady of Walsingham. The book itself takes you from locations in England to Ireland and into France and the Continent, with comprehensive travel information as you go; giving you a tour of some of the best historic sites that Europe has to offer – whilst never moving from your armchair.

No matter how familiar it is to us, each location is given the same level of attention, with detailed descriptions of the site, the things to see – and what not to miss – and the Yorkist story behind  it. Kristie Dean builds up the personal stories of the individual members of the family through the buildings and places particularly associated with them.

On every page Kristie Dean’s passion and enthusiasm for her subject shines through. Here, she writes about Westminster Hall:

Few other places have survived to offer the York enthusiast such a rich tapestry of history; few other places allow one to stand under the same roof where so much history has passed. The atmospheric presence of those long gone can be felt, separated from today’s visitor by only the thin wall of time. You might feel hurried to move on to the next room, but find a corner and stand for a moment to experience the atmosphere…..

You can vividly imagine being in Staindrop Church, or the church at Fotheringhay during the re-internment of Richard Duke of York in 1476, or feasting at the castle afterwards. Kristie Dean’s own information and knowledge is enhanced by her use of contemporary quotes, to give past descriptions of the locations and of the events she is describing.

It would be easy for a book of this kind to be confusing and higgledy-piggledy, but the author keeps focussed throughout and makes the book easy to follow, both as a history book and as a guide-book; keeping on topic and explaining any overlaps.

In short, this is a wonderful resource for both the armchair traveller, and the historical tourist, enhanced by photographs of locations and a level of detail that is second-to-none. It is a ‘must have’ on the book shelves for any fan of Richard III, the House of York or the Wars of the Roses in general, in order to enhance our knowledge of the period.

Kristie Dean has an MA in History and now enjoys teaching the subject, following a successful career in public relations. Her particular historic interest is the medieval era, specifically the Plantagenets, the Wars of the Roses and the Tudors. When not traveling for research, you can find Kristie at home in Tennessee with her husband, three dogs, and two cats. On the Trail of the Yorks is available now from Amazon UK and from Amazon US in May. And The World of Richard III will be released in paperback in May 2016, with its new title ….  On the Trail of Richard III.

4 thoughts on “Book Corner: On the Trail of the Yorks by Kristie Dean”