Today it is a pleasure to welcome Mary Anne Yarde, author of The Du Lac Chronicles, to History…the Interesting Bits with an article about her fascination with King Arthur. 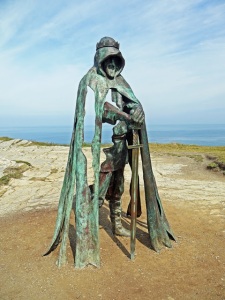 I have been fascinated with the life and times of King Arthur and his Knights of the Round Table since I was a child — I guess growing up a stone’s throw from Glastonbury (The Ancient Isle of Avalon) may have had something to do with that.

My book series, The Du Lac Chronicles, tells the story of what happened after the death of Arthur, and continues the story of his Knights and their sons. But to write about the end of Arthur’s reign, I needed to know about the beginning. A not so easy task, it turned out.

The history of a historical Arthur is not written in stone but is, instead, engraved in folklore and that brings its own set of challenges.

Firstly, where did Arthur come from? Well, that is an easy question to answer…

King Arthur was English. No, he was Welsh. Arthur was Scottish. He was from Brittany. Oh, for goodness’ sake, he was a Roman General!

Which is right? Arthur is so famous that everyone wants to claim him and, over the years, there have been many names thrown out there as to who he really was. But we mustn’t forget that when we are dealing with Arthur, we are digging up folklore, and that is not the same as excavating relics. We can make Arthur fit wherever we want him to, and that is where the problem lies. It is very easy to make mistakes, and I have read many books that claim to have found the real Arthur, only they haven’t, it is just a theory, sometimes a very shaky one.

The same can be said for Arthur’s famous castle, Camelot. There have been many possible locations for one of the most famous castles in history. Tintagel, Cadbury Hill, Caerlaverock Castle, have all been put forward, and recently it has been suggested that a small Roman fort at Slack is where the real Camelot once stood. However, during all this excitement and discoveries we have overlooked a fundamental issue — there was no Camelot. It was an invention of a French poet in 1180! How can you look for something that was never there to begin with?

The Dark Ages, in which my books are set, are equally challenging to research because there is a lack of reliable primary resources. What was written down was written down for a purpose and that purpose was usually politically motivated, which in itself is fascinating, although not so helpful. Now, in these early texts when Arthur is mentioned, there is nothing about him being a king. Nennuis describes him as a warrior on par with Ironman, but no mention of a crown.

It isn’t until the 12th Century when Geoffrey of Monmouth writes his great work that the Arthur we know is born. The History of The Kings of Briton was meant to be a historically accurate account of British History and for many, many, years what Monmouth wrote was considered factually correct. Of course, we now know it was anything but. However, that does not mean that Monmouth’s work is of no particular value. Monmouth borrowed heavily from folklore and it is his story that drives the legend of Arthur and his Knights forward. I think Monmouth’s book is incredibly important as it tells us a great deal about, not only the era, but also about the people who were listening to his stories. And if we dig a little further, we can discover that it wasn’t only the populous who loved listening to Arthurian tales. Those pragmatic monks at Glastonbury Abbey did as well.

Let’s take a journey back to 12th Century England…

A terrible fire had spread through Glastonbury Abbey, and unfortunately for the monks, they did not have the coffers to pay for the repairs. If only they could encourage more pilgrims to come to the Abbey. What could they do? Pray to God and hope all would be well…?

Thanks to Monmouth’s book Arthur was the hot topic of the day and people would pay to go on a pilgrimage to Arthur’s final resting place so they could pay their respects to this once great King. All that was needed was a good story and a grave. The monks of Glastonbury announced to the world that they had discovered Arthur’s final resting place. That brought in the crowds — much like Tintagel does for English Heritage today! Glastonbury Abbey soon had the coffers to make the repairs and then some. There was as much truth in the story of Glastonbury Abbey and King Arthur’s grave as there was in Th 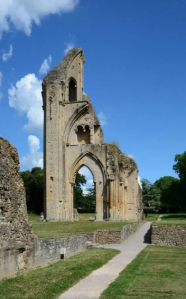 e History of the Kings of Briton. But for hundreds of years, both the Abbey and Monmouth were believed.

My books are not just set in Britain, but France as well, so I needed to have a good understanding of what was happening in both of these countries in the 5th / 6th Century in order to keep the history real in the telling. Before we look at any of these countries we need to look at the powerhouse of the world at this time, and that was the Roman Empire. However, the golden age of the Roman Empire was almost over; she was politically unstable and was withdrawing her forces from far-flung provinces such as Briton, to defend her borders.

But this dawning new era brings some of the most fascinating historical figures that ever lived. These were the days of men such as Clovis. Clovis won a decisive victory against Rome, at the Battle of Soissons in AD 486. But, Clovis’ ambition didn’t stop there. Roman Gaul and parts of Western Germany fell to him as well. He forged a new empire through blood, war, and marriage. He made Paris the capital of his new kingdom, and he was the first King of a united Frank (France).

The Saxons and the Angles crossed the South Sea (The English Channel) to take advantage of vulnerable Britain who, since the Romans had left, had split back into various smaller kingdoms. There was much infighting and unrest, it was the perfect opportunity for the Saxon’s to come over and stake their claim.

Brittany, like Britain, wasn’t one united country, but many, and they were a race of warriors. While they were busy fighting each other, they missed the real threat to the kingdom, which eventually would be their undoing and they would find themselves at the mercy of Frank.

While all this is going on, the Church is creeping into the crevices, and spreading the word of God and, what could be considered of equal value, one language — Latin. It could be argued that it was the Church that united Britain in the end.

This was a time of great unrest and change, but one thing remained constant for the general populous and that was storytelling. Arthur may well have been a general but folklore made him a Christian King and gave him a castle full of noble knights. Arthur and his Knights (most of them anyway) cared about the people they represented. Arthur was a good king, the like of which has never been seen before or after. He was the perfect tool for spreading a type of patriotic propaganda. Arthur was someone you would want to fight by your side. But he also gave ordinary people a sense of belonging and hope. He is, after all, The Once and Future King.

I have tried to show what life was like in the 5th /6th Century in my books, but I have been heavily influenced by folklore, because when you are dealing with this period in history you cannot dismiss it. Brittany, for example, is terribly difficult to research historically during this era, but when it comes to folklore, she is rich and if that is all she is going to give us, then so be it. Folklore is its own special brand of history, and it is often overlooked by historians, which I think is a shame. You can tell a lot about a people by the stories they tell, and people are still fascinated by this larger-than-life King, which I think says it all. Arthur may well have been a general, or a knight, he may have been English, he may not, but it doesn’t matter because his story is timeless, it will never grow old.

The ink has dried on Amandine’s death warrant. Her crime? She is a du Lac.

All that stands in the way of a grisly death on a pyre is the King of Brittany. However, King Philippe is a fickle friend, and if her death is profitable to him, then she has no doubt that he would light the pyre himself.

Alan, the only man Amandine trusts, has a secret and must make an impossible choice, which could have far-reaching consequences — not only for Amandine, but for the whole of Briton.

Born in Bath, England, Mary Anne Yarde grew up in the southwest of England, surrounded and influenced by centuries of history and mythology. Glastonbury–the fabled Isle of Avalon–was a mere fifteen-minute drive from her home, and tales of King Arthur and his knights were part of her childhood.

A Small Gang of Authors

I would like to say a huge ‘thank you’ to Mary Anne for such a fascinating post and wish her every success with her latest novel.