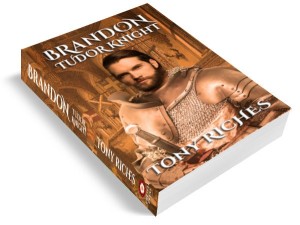 Today it is my pleasure to welcome author Tony Riches to the blog, with an article about the protagonist of his most recent novel, Charles Brandon.

Catherine was the only surviving daughter of Baron William Willoughby of Eresby, by his second wife Maria De Salinas, who was a Spanish Maid of Honour who came to England with Catherine of Aragon. Maria seems to have been the unfortunate queen’s closest companion and it is thought she named her daughter after Queen Catherine.

Records of the time suggest that Catherine Willoughby was an attractive, well-educated girl, who became a baroness in her own right after her father died in 1526. Charles Brandon would have been well aware that she was also the heiress to a substantial income of fifteen-thousand ducats a year.

It was little surprise to anyone when Brandon persuaded King Henry to let him buy the wardship of young Catherine Willoughby in 1528, (even though it seems he was, as usual, heavily in debt). Brandon’s plan was to secure her as a wife for his son, the eleven-year-old Henry, Earl of Lincoln (named after the king), once he came of age.

Catherine moved in to Brandon’s manor house at Westhorpe in the Suffolk countryside. She seems to have been happy to have Brandon’s daughters, Frances and Eleanor, as well as young Henry, for company, with Charles and Mary acting as her foster parents.

Mary Tudor was a friend and neighbour of Catherine’s mother, Maria, who probably saw this arrangement as likely to provide the most secure future for her daughter. Mary had been suffering from a long illness and died at Westhorpe (possibly of Tuberculosis) on the 25 June 1533.

Brandon, who was then aged forty-eight, decided it would be best if he married young Catherine (then aged fourteen) himself, and did so barely two months after Mary’s death. We must take care, of course, not to judge Charles Brandon by modern standards, although I’m sure Brandon enjoyed a few knowing winks from King Henry and his courtiers.

Importantly, it seems Catherine was happy to become Duchess of Suffolk, particularly when Brandon’s son, Henry, died the following year. Brandon’s marriage to Catherine secured him the rights to her lands in many parts of Lincolnshire, and by 1538 he became the greatest landowner in the county.

You can find out more about Charles Brandon and Catherine Willoughby in my new novel, Brandon – Tudor Knight, and I recommend a wonderful book by Evelyn Read, Catherine, Duchess of Suffolk, which became one of my main sources. After Brandon’s death, there was talk that the king might marry Catherine himself – but what actually became of her is proof that the truth really is stranger than fiction.

Tony Riches is a full-time UK author of best-selling historical fiction. He lives in Pembrokeshire, West Wales and is a specialist in the history of the Wars of the Roses and the lives of the early Tudors. Tony was a finalist in the 2017 Amazon Storyteller Awards with his book on Henry VII and is listed in the 2018 Top 200 list of the Most Influential Authors.

For more information about Tony’s books please visit his website tonyriches.com and his popular blog, The Writing Desk and find him on  Facebook and Twitter @tonyriches

Tracing the fortunes of the women who had a significant role to play in the momentous events of 1066, Silk and the Sword: the Women of the Norman Conquest is available from Amazon UK,  Amberley Publishing and Book Depository. It is scheduled for release in the US on 1 March 2019 and is available for pre-order from Amazon US. 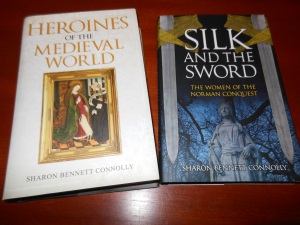