Over on The Review blog!

Read my review of G.J. Berger‘s wonderful South of Burnt Rocks West of the Moon.

“After three great wars, Rome has crushed Carthage. Now the undefended riches of Iberia beckon–gold, tin, olives, wine, and healthy young bodies to enslave. Burnt Rocks tells the story of Lavena, last child of the strongest remaining Iberian tribal leader at a time when Rome plunders and loots her land. At times helped only by her father’s favorite dog, a special horse, or guided by spirits of the earth and sky, she strives to unite her people and oust the Roman menace. Based on real characters, places, and events, Burnt Rocks recreates that shadowy history–and eternal human nature rubbed raw.” 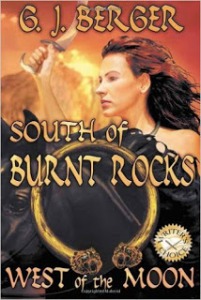 South of Burnt Rocks West of the Moon was a wonderful surprise.  It is one of those thought-provoking books that you don’t come across very often; transporting you back in time to the Roman occupation of the Iberian Peninsular. The heroine is a young girl, Lavena, not yet out of her teens, who is trying to fulfill her promise to her parents and save her people, whilst at the same time coming to terms with her father’s past.

Having peacefully co-existed with the Iberian natives, the Roman army has a new leader, and new agenda. They are searching for their lost scouts, for native gold, and eager for slaves. The Romans are relentless but Lavena must find a way to fight them with her small band of devoted warriors.
Among the Roman legions is one man, Martius, who searches for the truth about his missing brother but is also drawn to the ‘barbari’ girl, who appears to him in only glimpses through the trees.
The wonderful prose of the book draws you in,  the language paints its own picture of Roman occupied Spain, respecting the spirits and ancestors of the native tribes and weaving a spell that keeps you enthralled in the book to the very end.
When Lavena has to face a council of elders to give them the news of Rome’s aggression and  to plea for help, the picture is vividly described, the words magically entrancing:
“We humbly come to you, to this village, without any men, because the Roman overseer, Piso, left this land, and Rome sent a monster army in his place.”
The nobles quieted and leaned in further.
“That new army has more fighters and weapons and its killing madness is greater than I know how to tell you – and it comes this way.”…
“They come for all the gold in this land, for the young ones to take back as slaves – and the young women and girls to ruin in a manner none should ever know.”
… She told them what she could of the battle for her village, but not about how her mother and those with her died, not about the real end of the she-warriors. She told them how she fled.
G.J. Berger recreates the land of the Iberian Peninsular wonderfully; describing the landscape and its people in such amazing language that you can’t help but feel transported there. The contrast with the vast fighting force of the Roman army, the inexorable, unbeatable military machine that moves over the land relentlessly.
The characters are vivid and have a realism to be marvelled at. They are human, suffering through their fears and doubts, making mistakes and sometimes surviving in spite of themselves. You find yourself urging Lavena on, while feeling suitably disgusted at the mean, lascivious, grasping Roman leaders.
Throughout the book, you can feel the author has a strong sense of direction; he knows where he wants to take you, but knows that the journey is what matters. We follow Lavena from her training as a warrior, through the loss of everything she holds dear, to her final confrontation with the Roman army, knowing everything she has been through, everything that has led her to that moment…
I can’t tell you how much I enjoyed reading this novel. It was a surprise from the first words, drawing you in, leading you on Lavena’s journey and seeing the country of Spain in its early days; the landscape itself becoming part of the story. The sights, sounds and smells of Roman Spain invade your mind as you read.
It is hard to believe this is a debut novel. The storyline is impressive, the language polished; everything about it comes from a storyteller of immense skill and vision.
It is a book not to be missed.
*
My book, Heroines of the Medieval World,  is now available in hardback in the UK from both Amberley Publishing and Amazon UK and worldwide from Book Depository. It is also available on Kindle in both the UK and USA and will be available in Hardback from Amazon US from 1 May 2018.