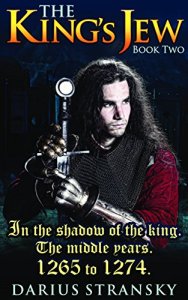 Today over at The Review, you can read my thoughts on Darius Stransky’s latest novel in his The King’s Jew series set in the time of Edward I and his  loyal knight, Cristian Gilleson, The King’s Jew. Book Two: In the Shadow of the King. The Middle Years. 1265 to 1274.

And there’s a fabulous giveaway! With one paperback copy and 3 e-books to be won.

A few years ago I read and devoured The King’s Jew by Darius Stransky, so when I got the opportunity to read and review its sequel, The King’s Jew Book 2: In the shadow of the king. The middle years. 1265 to 1274, I jumped at the chance. It follows the story of Cristian Gilleson, a knight in the service of Henry III’s son and heir, the Lord Edward. Book 1 told the story of Cristian’s early life and his friendship with Edward, ending with the Battle of Evesham and the destruction of the rebel army under Simon de Montfort. Book 2 picks up immediately where the first left off.

The King’s Jew Book 2: In the shadow of the king. The middle years. 1265 to 1274 takes us on a journey that incorporates the aftermath of Evesham, the Crusades and Edward’s accession to the throne itself. Told in flashback, from Westminster Abbey, where Cristian is holding vigil at Edward I’s bier on the night before his funeral, the story unfolds with the sense of danger ever present, both in 1307 and in the preceding years. Cristian’s enemies are determined to see him destroyed, as much for the secrets of his birth as for his actions in support of Edward since they first became friends.

To read the full review of this fantastic novel – and to enter the prize draw and be in with a chance in this fantastic giveaway, simply visit The Review and leave a comment.