From Windsor to Weymouth, the shadow of scandal was never too far from the walls of the House of Hanover. Did a fearsome duke really commit murder or a royal mistress sell commissions to the highest bidders, and what was the truth behind George III’s supposed secret marriage to a pretty Quaker? With everything from illegitimate children to illegal marriages, dead valets and equerries sneaking about the palace by candlelight, these eyebrow-raising tales from the reign of George III prove that the highest of births is no guarantee of good behaviour. Prepare to meet some shocking ladies, some shameless gentlemen and some politicians who really should know better. So tighten your stays, hoist up your breeches and prepare for a gallop through some of the most shocking royal scandals from the court of George III’s court. You’ll never look at a king in the same way again…

I have been taking a break from the medieval era this month to visit the court of King George III, reading the fabulous non-fiction book, The Scandal of  George III’s Court by Catherine Curzon. And what a thoroughly delightful read!

Anyone who has studied the Georgian era to some extent will be familiar with some of these scandals, but to have them all presented on one book is a real treat. Catherine Curzon loves her subject – and her subjects – and this shines through on every page. This is not some onerous read, listing scandal after scandal, but an in-depth look at some of the most devastating and salacious scandals that rocked the Georgian court – and obviously tried the precarious mental state of the king to its very limits.

My favourite is the retelling of a story which I have known for some time, but have never looked into in the depth that Catherine Curzon delves. The story of Caroline Matilda, Queen of Denmark, her mentally unbalanced husband and her lover, Struensee, is one that everyone should know, and ultimately a tragedy for all involved.;

Christian’s mental health had by now deteriorated drastically and when Struensee was promoted again, this time to Councillor of Conference and the queen’s ‘very’ Private Secretary, there could be no doubt how the wind was blowing. Struensee warned Caroline Matilda that her husband would soon be incapable of ruling and someone else would need to steer the ship of state. If Caroline Matilda didn’t seize the day, then Julianna Maria certainly would. That was all it took, and soon Denmark’s newest power couple began positioning themselves to take the reins of the kingdom.

Oddly, almost as soon as the affair began, Christian warmed to his wife, and began to hold her in a higher regard. Together, the trio of king, queen and doctor seemed to get along in a way that Caroline Matilda and Christian never had before. Though this was no ménage both husband and wife seemed far more at ease, and at 18, Caroline Matilda was finally flourishing, no longer the unhappy young woman she had once been.

She donned male attire to ride astride through the towns and countryside of Denmark and even took part in archery contests, scandalising the public and court alike. Her inseparable shadow, Struensee, was in the ascendant. He and Caroline Matilda’s passion blazed and with it, his influence only increased. By now virtually insane, Christian looked to his wife and doctor for guidance in all things yet Stuensee knew that if he wanted real power, he needed real office.

He wanted to be Prime minister.

Not all the scandals involve love affairs – although the majority do (that’s the Georgians for you!). Catherine Curzon also tells us the story of the Duke of York and the scandalous sale of army commissions – when he was Commander-in-Chief of the army – by his girlfriend! There is also the attempted assassination of the Duke of Cumberland, which left the poor prince with some horrific head injuries. The Scandal of King George III’s Court does not just tell us the stories, but analyses their nuances, the veracity of the facts and tries to get to the bottom of exactly what happened and why.

The book also emphasises the great interest by the Georgian public, in scandals involving the royal family, how they hung on every word of scandal they could read about – and how George III and Queen Charlotte tried to protect the dignity of the crown amidst the numerous dalliances of the king’s own brothers and the royal offspring.

I loved Catherine Curzon’s writing style! Such a fun read!

The strength of this book lies with the author. Catherine Curzon has a talent for telling stories – especially scandalous ones, apparently. She draws the reader in with an easy -going, conversational style, presenting the facts with her own colourful observations, making the reader feel a part of the scandalous liaisons and conspiracies that make up this book. The Scandal of King George III’s Court is a pleasure to read, and probably the greatest escapism you will ever experience from a non-fiction book.

The Scandal of King George III’s Court is available from Amazon UK and Pen & Sword Books.

Catherine Curzon is an author and royal historian of the 18th century.

She has written extensively for publications including HistoryExtra.com, the official website of BBC History Magazine, Who Do You Think You Are?, Your Family History, Real Crime, Explore History, All About History, History of Royals and Jane Austen’s Regency World. Catherine has spoken at venues and events including the Stamford Georgian Festival, the Bath Jane Austen Festival, Lichfield Guildhall, the National Maritime Museum at Greenwich, Dr Johnson’s House, Kenwood House, the Hurlingham Club, Godmersham Park, and the Royal Pavilion, Brighton. She has provided additional research for An Evening with Jane Austen, starring Adrian Lukis, and has introduced the performance at venues across the UK.

Catherine holds a Master’s degree in Film and when not dodging the furies of the guillotine can often be found cheering for the mighty Huddersfield Town. She lives in Yorkshire atop a ludicrously steep hill with a rakish colonial gentleman, a long-suffering cat and a lively dog.

Tracing the fortunes of the women who had a significant role to play in the momentous events of 1066, Silk and the Sword: the Women of the Norman Conquest will be released in the UK on 15 November 2018 and is available for pre-order on Amazon UK,  Amberley Publishing and Book Depository. It is scheduled for release in the US on 1 March 2019 and is available for pre-order from Amazon US. 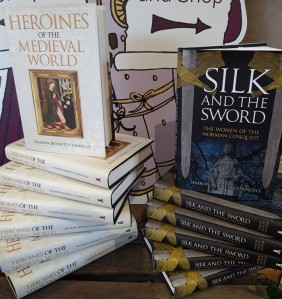 Coming out in Paperback on 15 March:

Telling the stories of some of the most incredible women from Medieval history, Heroines of the Medieval World,  is now available in hardback in the UK from Amazon UK, in the US from Amazon US  and worldwide from Book Depository. It will be released in paperback in the UK from 15 March 2019 and in the US on 1 June 2019. It is available for pre-order from both Amazon UK and Amazon US.

3 thoughts on “Book Corner: The Scandal of George III’s Court by Catherine Curzon”