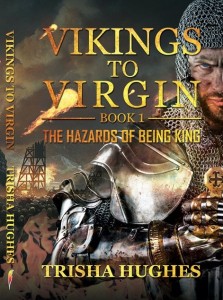 In Vikings to Virgin – The Hazards of Being King Trisha Hughes provides the reader with a pacey introduction to the many pitfalls faced by the ambitious as they climbed the dangerous ladders of royalty. It is easy to think that monarchs are all powerful, but throughout the Dark and Middle Ages it was surprisingly easy to unseat one and assume the crown yourself. But if it was easy to gain … it was just as easy to lose.
From the dawn of the Vikings through to Elizabeth I, Trisha Hughes follows the violent struggles for power and the many brutal methods employed to wrest it and keep hold of it. Murder, deceit, treachery, lust and betrayal were just a few of the methods used to try and win the crown. Vikings to Virgin – The Hazards of Being King spans fifteen hundred years and is a highly accessible and enjoyable ride through the dark side of early British monarchy.

Vikings to Virgin Book  1: The Hazards of Being King by Trisha Hughes is a thoroughly engaging and entertaining introduction to English history. Fast-paced and accessible it relates England’s history in a chronological narrative, from the time of the Viking invasions to Elizabeth I, arguably England’s greatest queen.

In England, the story of our kings tells the history of the country and its people. From the likes of  Alfred the Great and Edward the Martyr, through Henry II to Richard III and Queen Elizabeth I herself, the monarchs defined England’s history and the direction that was taken by its people. Trisha Hughes shows us that journey, pointing out where paths deviated, where events overtook the king and the people asserted themselves, such as Magna Carta and what could have been.

A great introduction to the length, depth and breadth of English history. Telling the story of each king in turn, it gives you their highs and lows, what they are famous for and the good, the bad and the despicable of each era. The author’s depth of knowledge of English history allows her to tell us the story of each king in turn, from the Saxons, the Danes, the Normans and Plantagenets, through to the Tudors, giving each monarch her personal attention and a fair appraisal of their achievements, failures and character, but giving no quarter to the ruthless and the weak alike.

By all accounts, Maud was remarkable. She was said to “have the nature of a man in the frame of a woman.” Fierce, proud, hard and cynical, her love of politics overshadowed all other passions. But Maud was with her husband in Anjou when Henry died and Stephen was first on the spot. Stephen also had an advantage – his brother was Bishop of Winchester with a great voice in council and with this backup, the barons stood by him.

The speed with which the aristocracy accepted Stephen was mindboggling and speaks volumes about the rules regarding female queens in the 12th century. The prospect was not a promising one for Maud. There was also the question of who had the most power, and in England at this time in history, succession was still not fully decided by blood alone. If that had been the case, Henry would never have been king in the first place. Henry had snatched the throne from William Rufus, and then stolen the throne from right under his elder brother’s nose while Robert was crusading in Sicily.

It seems that history was repeating itself because Stephen had no real claim since there was an elder brother, Theobald of Blois, whose blood claim was stronger. But Stephen was wealthy, powerful and charming and his wife’s country of Boulogne was important to England.

Trisha Hughes writes as if she is in the room talking to you. Her fun and easy manner makes the book a thoroughly enjoyable read. Her stories are engaging and her knowledge and love of English history shines through in every page. This book gives you the best and worst that English kings had to offer, giving an entertaining commentary and interesting insights into the characters and actions of the various kings and queens. The author’s assessments of the highs and lows of each reign are testament to her love of history and the depth of research she has invested in this marvellous book.

Vikings to Virgin Book  1: The Hazards of Being King can be read and enjoyed by all. It would be incredibly useful to anyone wanting an overview and understanding of the life and times of England’s medieval kings.  Whether reading for fun, or to expand your knowledge, from teenagers to octogenarians, from the amateur history fan to those new to the subject, there is something in this book for everyone.

Trisha Hughes started her writing career with her autobiography ‘Daughters of Nazareth’ eighteen years ago. The debut novel was first published by Pan Macmillan Australia and became a bestseller in 1997 beating the current Stephen King book to the top 10 bestsellers at the time.  Since then she has discovered a thirst for writing.  She’s written crime novels but her latest book, the first in her ‘V 2 V’ trilogy, ‘Vikings to Virgin – The Hazards of being King’ is her passion and due for release on 28th February 2017. She is currently working on the second in the series ‘Virgin to Victoria – The Queen is dead. Long live the Queen.’

You can connect with Trisha through:  Trisha’s Website: www.trishahughesauthor.com Or: www.vikingstovirgin.com and you can find Trisha on Facebook at Trisha Hughes Author and Twitter at @trishahughes_

2 thoughts on “Book Corner: Vikings to Virgin by Trisha Hughes”