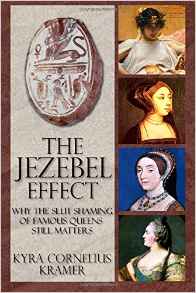 The fact that Cleopatra is better known for her seductions than her statecraft, and that Jezebel is remembered as a painted trollop rather than a faithful wife and religiously devout queen, isn’t a way for historians to keep these interesting women in the public eye, rather it’s a subversion of their power, a re-writing of history to belittle and shame these powerful figures, preventing them from becoming icons of feminine strength and capability. Slut shaming has its roots in our earliest history, but it continues to flourish in our supposedly post-feminist, equal-rights world. It is used to punish women for transgressions against gender norms, threatening the security of their place in society and warning that they’d better be “good girls” and not rock the patriarchal boat, or they, too could end up with people believing they’ve slept with everything from farm animals to relatives. This is The Jezebel Effect

The Jezebel Effect: Why the Slut Shaming of Famous Queens Still Matters by Kyra Cornelius Kramer is a remarkable, thought-provoking analysis of the way queens have been treated and judged, based on their sexuality. The author is passionate about her subject and pulls no punches. Her arguments are well thought out and presented in such an honest, forthright manner that it is as if she is talking to you personally. It is a surprisingly enjoyable book; and I guarantee you will learn something new and find yourself re-appraising your own thoughts and approaches to women in history.

Starting with the biblical queen, Jezebel, and including Cleopatra, Anne Boleyn, Katherine Howard and Catherine the Great, Kyra Kramer  uses these queens as case studies demonstrating the way a woman’s reputation can be won, lost or destroyed through her sexual activities. Taking each queen in turn, their lives are analysed in great detail, demonstrating how political and personal slander were used by their enemies to create their bad-girl images.

For the last 500 or so years, the most popular version of Anne’s life has her playing the role of sultry harlot, a woman willing to use her sexuality as the bait to trap a king. At the very least it has been taken for granted that she wanted to be queen and manipulated Henry in order to achieve her goal. She looms in the public mind as “the most popular femme fatale, far outranking Cleopatra or Catherine the Great of Russia”. Inasmuch as Anne has been cast as a sly temptress making a gambit for the throne, here execution seldom engenders pity…

Kyra Kramer uses the queens as examples of how the stories of their lives have been manipulated as a political weapon to discredit and to apportion blame. The author goes on to present modern-day situations and makes an amazing case of showing how the way women were treated and vilified in the past is informing our thoughts and opinions of today, and how the shaming of women due to their sexual practices is continuing, and expanding, especially in the internet age.

This book will make you think again about how you present and represent women in your own life – it made me rethink a portion of my book as I realised I had conceptualised one of my ‘Heroines’ based on the deeply entrenched way women have been viewed for centuries. We see it in everyday life: a woman has an affair with a married man and it is she who is blamed, not the man; a female politician gets threatened with rape because she acts against the norm, Kyra Kramer demonstrates how such concepts have been used and developed throughout the centuries.

The Jezebel Effect: Why the Slut Shaming of Famous Queens Still Matters is a fabulous, fascinating read that will make you think again of how women have been viewed in the past, and are still being viewed today. It’s an enjoyable read that combines the history with the philosophy and politics of the sexual activities of some of the most famous – and infamous – of queens. It is a forthright analysis of women’s history that will leave you not only thinking about its contents for days afterwards, but about your own approach – whether you’re a man or a woman – to how women are seen and appraised every day.